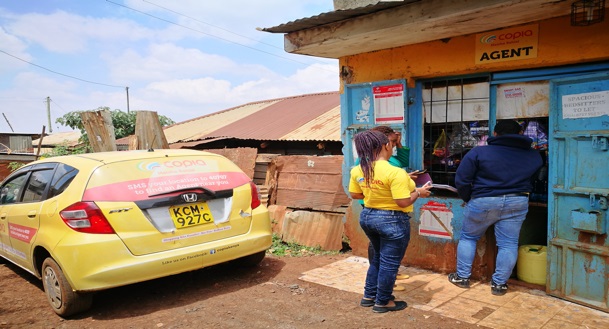 When one mentions Kenya, the first thing that probably comes to mind is an Olympic or Marathon runner crossing the finish line with all the competition a good distance behind. Others may be taken to thoughts of a clear blue sky in the African savannah, while viewing a pride of lions a short distance away. While running and the safari experience are indeed unique Kenyan hallmarks, in recent times, the start-up space has exploded, with this East African nation being referred to as “Silicon Savannah”.

I was therefore quite excited when I got an LGT Fellowship role with Copia, an e-commerce company that is changing the way that Bottom of the Pyramid (BoP) Consumers make retail purchases. A rural/peri urban customer visits a local kiosk which is a Copia Agent, and browses through the catalogue (physical or mobile app) choosing what they want to order, and the Agent places the order on their behalf via a text message. Copia receives the order, packs it (a process internally known as kitting) and then delivers it to the Agent within 2 days using our logistics network. The agent pays for the order using mobile money either upon making the order or upon delivery, and earns a commission on the sale. Copia currently services approximately 3,500 agents and 35,000 customers monthly.

Having never worked in the retail space before let alone e-commerce, I was initially apprehensive about the impact my skills and experience would have. Fast forward 11 months, I can safely say that I have learnt immensely, while my skills and experiences have been utilized in more ways than I could have ever imagined. Under the guidance of the CFO who insisted on being called by his name abbreviations (DD), I was given the freedom to help Copia as I saw fit, as the organization continued on its upward growth trajectory.

One of my key areas of responsibility was Pricing. Having previously done pricing analysis albeit in a B2B setting, as well as taken some Pricing electives during my MBA, I was fairly confident that I could handle what came my way. Little did I know that pricing for BoP consumers is a whole different ball game, and that many factors need to be taken into consideration when making a pricing decision.

With Copia having more than 2,500 active Stock Keeping Units (SKU’s), the task had an added layer of complexity, but within a few weeks I was up and running with a good grasp of key factors to consider. As part of my induction, I had been taken into the market to see the actual operations, and this was an invaluable experience, as one really gets a good feel of the market and what an everyday consumer considers when making a buying decision.

A few months into the Fellowship, I again went out into the market, this time with an Area Manager and Price Checker to carry out market price intelligence. I would recommend the team that undertakes this exercise week in week out for any intelligence role’s, as it’s much harder than one would expect, especially considering that the competition are informal operations in peri-urban localities.

Once all this information is collated, the analytical part would then begin, involving studying key trends such as customer numbers, product sales and margin impact, before finally making a pricing recommendation. In all this, it should be emphasized that it was imperative that a balance was found, between a price that is able to sustain operations, but that won’t hit the pocket of a customer too hard, any mis-match would threaten Copias’ sustainability and value proposition.

As I come to the end of the fellowship, the most memorable thing I will take away from my experience, are the relationships fostered with the different people I interacted with. I was fortunate enough to have had the chance to engage with colleagues from all levels of the organization due to the role I was playing, and the drive and determination evident in all was unbelievably inspiring.

Everyone is focused on playing their role to help Copia achieve its overall objective, with the motivation and drive to scale operations and impact consumers that ‘traditional retail’ often neglects, not only in Kenya, but Africa and beyond. With the whole operation having recently moved into a central Fulfilment Centre in a Modern grade-A Logistics Distribution Complex, and with geographical expansion planned in the coming months, I am confident that Copia will continue disrupting the retail space in Kenya and beyond for years to come. I am humbled by the opportunity I have had to play a part in Copias’ story.