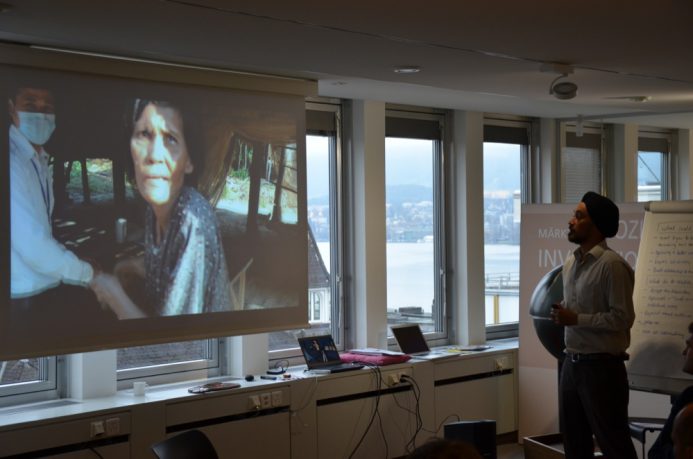 The LGT Impact Fellowship offers experienced business professionals the opportunity to work full-time for one year with impactful organizations and social businesses supported by LGT in Africa, Brazil, China, India, Southeast Asia or the UK.

In the Alumni Spotlight series, we dive deep into past Fellows’ experiences and learnings from the Fellowship, and their career trajectories since then. In the first instalment of 2019, we caught up with Amandeep Singh from the 2012 cohort.

Q: You started your career in analytics and consulting roles. Can you tell us a little more about your background and what really drew you to the healthcare space?

A: I studied Pharmacy at BITS Pilani. I wasn’t very keen on working in the pharmaceutical industry and thought that consulting was an excellent place to start if you’re good with numbers and can use them to tell a story. At Boston Analytics, I was in an industry-agnostic role but still took on a lot of pharmaceutical and medical device industry cases which piqued my interest. After a few years, I moved to Datamonitor where I was able to develop a narrower focus while consulting for international pharma companies looking to enter or expand in the India market

Q: Four years into what one might imagine was a lucrative job with a pretty well-defined career path, you decided to drop everything and relocate to Cambodia with the LGT Impact Fellowship. What drove you to do this? Were you actively looking to move to the social impact space or is it something you stumbled into?

A: As time went by, I found that the short-term nature of consulting assignments didn’t give me enough ownership over the outcome of projects or visibility into their feasibility and success. It stopped challenging me as the analysis is just one part of the puzzle and without the experience of actually making things happen, it may not even mean much. I was also unsure of my long-term ambitions and the kind of work I wanted to do next. What I was getting increasingly keen on was that I wanted a superior challenge when it comes to problems, either in society or business. What really fascinated me about the social impact space was the opportunity to grapple with problems that could take a lifetime to solve, and that too probably only to some extent. And these real-world problems were all around me, I just needed to look with patience and curiosity.

I soon decided to leave the bubble of a “consulting“ career and began looking for avenues where I could have exploratory opportunities to get exposed to challenging public sector problems. I had brief voluntary stints with an Ashoka entrepreneur who was trying to build micro-health insurance product for the poor in collaboration with large banks in India, and Clinton Health Access Initiative (CHAI) on helping them start their vaccines program. I was then lucky to stumble upon the LGT Impact Fellowship which had an interesting opportunity in Cambodia that looked right in every sense. Of course, there was a bit of uncertainty in my decision, but I felt that if I didn’t take the decision then, it would only get harder as time went by!

Q: As an LGT Impact Fellow, you spent a year as Country Manager for Operation ASHA, a nonprofit that works with local government, communities, and supporting partners to provide free Tuberculosis treatment to the disadvantaged. Can you tell us more about your experience and some of the challenges you faced?

A: When I signed up to be an LGT Impact Fellow, I was chasing experiences, not organizations. Operation ASHA was looking to scale their community-based TB care model from 1 to 5 districts in Cambodia, where they had expanded to as the second country of operations in 2011. I was responsible to manage the overall scale-up of country operations, adjust their service model to suit the context in Cambodia, and maintain the organization’s public-private partnership with the Cambodian Ministry of Health. Though I was based in the capital, Phnom Penh, the position required significant travel to the rural provinces. I had a fantastic team of 16 people (I was the only non-Cambodian) when I joined and I’m happy to say that several of them are my best friends to this day.

In the one year I spent at Operation ASHA, we grew spectacularly – from a team of 16 to 65 people, and from having treated 300 patients to 3300, grossly surpassing our target of treating 1000 patients. It was a great year!

Of course, the role came with its challenges. Working in a foreign context with local nationals took me with a bit of surprise in the beginning and I was also entirely new to the sector. Over time, I realized what it’s like to work on the ground with government entities, and the amount of advocacy and evidence generation that is required over a sustained period to implement real, lasting change at scale.

Q: What are some of the things you learned on the job? How did they help you prepare for a career after the Fellowship?

A: For one, I learned that you don’t need to be a genius to create impact! It’s less about being smart and more about being thoughtful, empathetic, collaborative, flexible, hard-working and ambitious. You’re also valuable for the role you play in a group of people.

I also learned a lot about working in resource-constrained environments, right at the heart of public policy and implementation. It was an invaluable lesson in understanding how decisions are evaluated and made, and how complex systems work.

On a more personal level – I come from India where there are several traditions and customs you simply never question. When I moved to Cambodia, I saw similar ‘unquestionable traditions’, albeit ones which were exactly the opposite of what I was used to at home. It made me realize the limits of my own imagination; that I’m not just a part of my neighbourhood, my city, or country. I’m in a big world full of people who – despite all the surface-level differences – think and act just like me!

Q: Fast forward one year. How did you approach taking the next step in your career after the Fellowship?

To be honest, one thing led to another. I didn’t have all my dots lined up for the future but I hoped that they would connect. After my Fellowship ended in early 2013, I joined a joint venture of UNESCAP and Hilti Foundation in Manila to work on the early stages of a social enterprise looking to provide eco-friendly affordable housing in Philippines I worked closely with the Founding CEO and another colleague in the team of three to develop the business model of the enterprise in collaboration with the Philippines government. As my work on the project was winding down, CHAI (where I had worked for 3 months before beginning my Fellowship) reached out to me about another short-term role in Cambodia since they knew I had done similar work in Cambodia before. It felt like all the dots were being connected and I ’ve been with CHAI ever since!

Are you an experienced business professional looking for an opportunity to use your skills to create social impact? We’re looking for people just like you to join the LGT Impact Fellowship 2019 cohort. Learn more and apply here today!