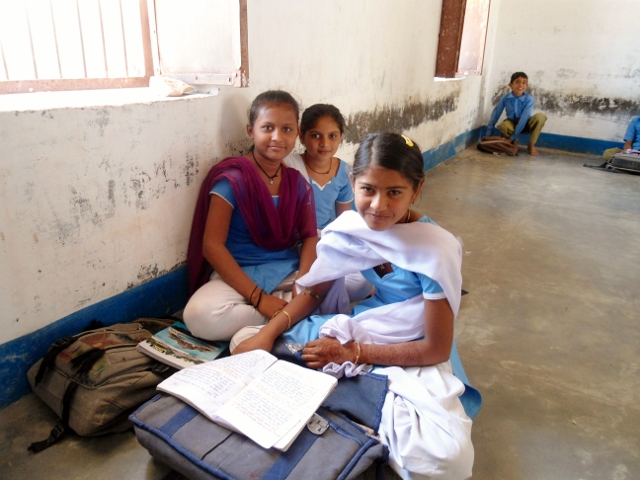 A field visit and the importance of the context

A few months ago, I travelled to the district of Pali, Rajasthan, for my first field visit. It was an essential step from the program model in black and white on the paper to complex, multicolour reality with its infinity of details. Among other observations made in the 5 schools we went to, accompanied by field coordinators and volunteers, two major takeaways stuck out.

Firstly, visitors can only be struck by the students’ eagerness to learn. We had the opportunity to witness how activities of our Creative Learning and Teaching set were implemented. The first activity was to build one’s name with Hindi letters spread on the ground. One child at a time was squatting in the middle of the circle, which, I first thought, could be quite boring for the other children sitting around, especially given the number of them! Not in the least bit. They all watched intently, some of them even joining the centre to assist their classmate. The second activity was an English letter recognition exercise. Each child would visibly hold in their hands a letter of the English alphabet, while a child standing in the centre was given the instruction to find the “M” for instance. If s/he found it, the child holding the “M” was to quickly tell another letter so as to keep the child in the centre running. Everyone was enjoying themselves, laughing and learning. In this residential school (KGBV), 19 out of about 80 girls were enrolled by Educate Girls

The second takeaway concerned the context, or what some call “external independent variables”. Indeed, models are never implemented in a social vacuum. Context matters and influences the outcomes, be it positively or negatively. (As far as revelations are concerned, it’s a bit lame, I know). Here, such variables include the infrastructure for example. Some classrooms had bare walls, while alphabets, images or maps would hang in other ones. These small details can create an environment more conducive to learning. Social actors also have a role, and both the volunteers’ level of involvement and the teachers’ attitude towards Educate Girls and their degree of professionalism can affect the success of our program, boosting or restricting it. If teachers are laid-back and expect nothing but their monthly pay, it would certainly not help children achieve better learning outcomes or motivate a freshly enrolled girl to stay in school. But no NGO holds sway over the reform of the whole system of public education. School improvement plan, facilitated by Educate Girls. Most indicators are green, i.e. “good” in that school.

At the age of 16, I spent 1 year in a public high-school in Ecuador. My experience in that school was enriching and repelling at the same time. Teaching was based almost exclusively on rote learning. In the philosophy class, we literally had to copy-paste obscure write-ups about classic theorists. Unsurprisingly, no one ever came to understand Hume’s or Descartes’s thoughts, not even the teacher. Rote learning and the complete absence of reflection-based examination set perfect conditions for cheating to thrive. Crumpled paper balls would fly in the air during the exams, sometimes landing on the wrong place and causing a lot of giggling. Teachers’ absenteeism was striking. The PE teacher came a few times during the year, mostly to have us write down the dimensions of a basketball ground. But still, twice a week, we had to wear the special uniform for physical education, lest we were sent home. They were very strict on this kind of formal rules. Our maths teacher also showed up a couple of times although I don’t recall seeing him properly teaching. On his first appearance, he had actually come to sell us a CD-ROM with the solutions of the exercises (he could at least do the maths when it came to his income). Anyway, when teachers didn’t come, that is, most days, we had lots of fun, dancing on the tables and then swiftly jumping back at our desks when the inspector came in, which occurred every day though. Nevertheless, boredom overcomes one quickly. Even I wanted to drop out. Every Monday morning, all students would gather in the patio to sing the national hymn, elect the “reina del colegio” or listen to the history teacher with his droopy moustache explaining that no sex before marriage was the best way to avoid pregnancy (needless to say, sexual education was not in the concepts directory of that school). Amongst the 3000-ish female students aged 12-18 of that single-sex school, few had daily contact with same-aged males. Nevertheless, and maybe because of that, many would end up pregnant and drop out – but this is a separate discussion. Alternatively, they ended up, after 12 years of schooling, not being able to conjugate the verb “to be” in English and thinking that Jesus and dinosaurs lived at quite the same time. After that year, I came back to Switzerland – a place where public schools enjoy a relatively high quality and private schools are mostly meant for low-achievers – and I had never been as happy to begin school again. The dwarfing problems of public education

Public education, i.e. the education available to the poor, in Ecuador and certainly in a majority of developing countries, faces huge structural problems. Actions taken by NGOs or civil society bodies should be replaced, and understood, in the context of these major public policy challenges.

It is certainly not my intention to overgeneralize and throw every government teacher in the developing world into the same pot. That being said, there are without a doubt some similarities between the education available to underprivileged Ecuadorian and Indian children. The government’s big push for access to primary education has come with pressure for results. According the Right to Education Act 2013, every child in India (with a few minor exceptions) should have a school within a radius of 1-3 km. This has been achieved, with 95% children having a school within half a mile from their home, and it is a commendable result. However, it is difficult to truly grasp the full picture of education in India as it stands, given the above mentioned pressure and a certain lack of transparency.

As part of my fellowship, I spent some time collecting data. It is not quite as simple as going to the official statistic website and downloading the relevant data in a few clicks. The least we can say is that is blurry and a high tolerance for ambiguity is necessary. Depending on the source, the number of out-of-school children (OOSC) in India varies by four of five times as much: 1.7 million OOSC is what is stated by a recent UNESCO report, based on data from various government agencies versus over 6 million OOSC according to an independent survey (SRI-IMRB 2014), which is a source also used by UNESCO/UNICEF. At least, this tremendous gap is somewhat consistent with the gap existing for 2008 (2.3 mio versus 8 mio OOSC). The data published by the government concerning enrolment is criticized by a number of NGOs for showing serious underestimates.

However, here are some reliable statistics: Educate Girls currently operates in 7 districts of the state of Rajasthan and focuses on enrolment, retention and learning outcomes of girls and children who mostly fit into several of the above categories (rural, girls, marginalized). The facts and figures are even gloomier for Rajasthan:

To sum up, even though the number of out-of-school children has significantly decreased over the past years, multiple challenges still exist and large problem pockets remain to be filled, especially where several discrimination criteria combine, i.e. for rural, marginalized and girl children in specific states such as Rajasthan.

One more thing is sure: “access to education” does not yet mean “education”. Enrolment is pointless without ensuring the delivery of – even minimal – learning outcomes. Quality cannot be given up on. But as the UNICEF (UNICEF / Roshan Chitrakar, 2009) puts it, “[i]n the pursuit of expanding free and compulsory primary education for those who cannot afford to pay, quality is being compromised as something that can wait for future consideration.” (p. 63). “The excessive emphasis on meeting quantitative targets through free and compulsory primary education schemes is referred to as dichotomization of educational provision into ‘access first’ vs. ‘quality later’” (p. 13). Here’s the latest picture for government primary schools in rural India (statistics from ASER report 2014):

Camille is a LGT VP ICats Fellow 2015 and works as development manager at Educate Girls in Mumbai. She holds a Master’s degree in Public Policy and Management and has several years of professional experience in project management, communications & PR and legal & governance research. She has been committed for over a decade in a half-dozen NGOs relating to sustainable development, migrants & asylum seekers’ integration and social entrepreneurship.