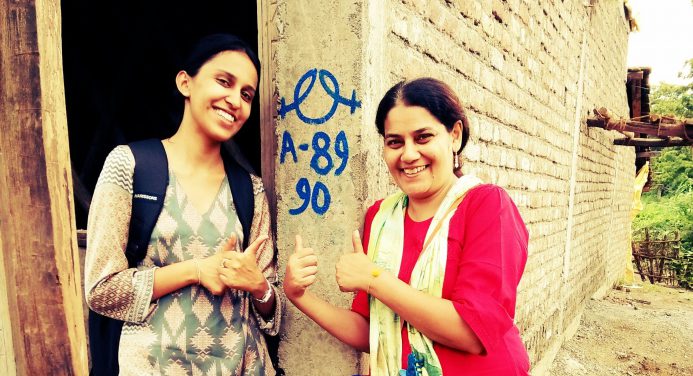 A 4 hour journey from Indore in the wee hours of the morning and we arrived in Pipal Tola – a village in our new district of Khandwa in Khalwa block. With the intent of attending a door-to–door survey we are told we will also be part of the social mapping process done prior to the door-to-door survey. A quick Google search (which took a few minutes to download as most of these areas have poor or no networks) revealed that it is a visual method of showing the relative location of households and the distribution of different types of people (such as male, female, adult, child, landed, landless, literate, and illiterate) together with the social structure and institutions of an area.

We were still keen to know how it really worked. So when we finally reached the field co-ordinators had already completed the first leg of actually walking through entire Pipal Tola, having a preliminary conversation with a few and drawn out a map on paper having identified all households, schools, institutions and even the hand pumps. Then began the process of adding color to it all and I realized the activity’s outcome was way more than just knowing the landscape…

1. Sparking the interest – Avinash, the Block officer of Pipal Tola had intentionally chosen a central location to have the social map drawn out. The crowds started gathering little by little to know what the hoo ha was about. We were slowly surrounded by the men, with their wives joining too (though quietly sitting in a corner) and most importantly the children were all gathered keen to know what all the vibrant colors on the street of their village were about.

An elderly women who was enquiring an FC about what we were doing. I asked her if she went to school to which she replied “Maine toh aaj tak school ki shakal bhi nahin dekhi” (I have never even seen a school)

2. Knowing the community influencers – The up-sarpanch of the area seemed to be leading at the fore-front of the activity. I was keen to know where the Sarpanch was only to realize that the village actually had a female sarpanch who was nowhere to be seen but was represented by her husband. It was quite clear to see who were the ones supporting the up-sarpanch while others quietly mumbled in the corner about their own apprehensions regarding the activity.

3. Getting abreast of the upcoming challenges – We could not comprehend the quiet mumbling as they were speaking in a local dialect. Upon requesting the FC to translate we came to know they were discussing the futility of education. And how some of them had to leave their education half way to work so that they can feed their families. The later door-to-door survey revealed that the major impediment to education was putting children to work to support the meagre family income.

4. Re-enforcing the landscape – Of-course they spoke freely and corrected wherever the map was wrong helping us identify some remotely located households or some hidden one behind the other. (Google Maps doesn’t really solve for every location issue as we urban dwellers have gotten used to!)

5. Gathering some early supporters – Once the map was drawn out and frozen – we started with the door-to-door survey. A happy realization that some of the men and children followed us supporting in the door-to-door survey pointing us to their houses and telling us the statistics of empty households where the families were working on fields.

Well we just followed one of the 3 teams of field co-ordinators and were able to complete the door-to-door survey of 97 households in 4 hours. Our goals of enrolment, retention and learning outcomes are still away but social mapping was definitely a great way to start our endeavour of Educating Girls!