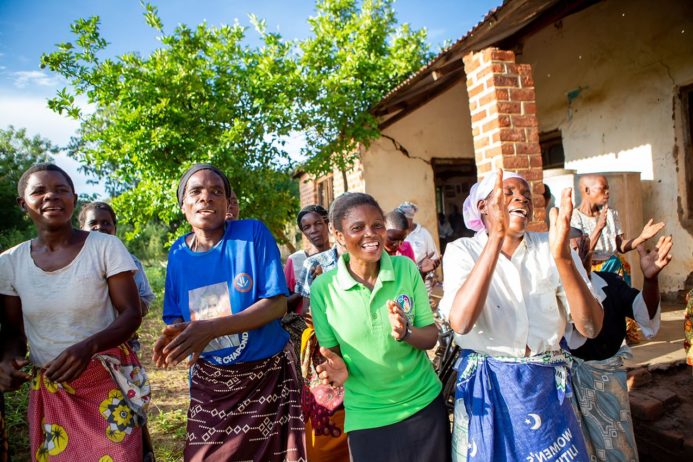 Please, keep it a secret…. When I received the email from LGT confirming the fellowship interview for mothers2mothers (m2m), one of its portfolio organizations, based in Malawi, my first question was: Where is Malawi? Until this time all I knew about Malawi was “It is in Africa”.

Previous to the interview, I studied as much as I could about m2m and Malawi; and it looks that worked because since August last year I am working as Community Health Fellowship in m2m Malawi.

After my deep desk research, I engaged immediately with m2m’s mission, an African based NGO that eliminates pediatric AIDS by training and employing people living with HIV (mentor mothers and expert clients) as frontline health workers in low-income communities.

Likewise, I discovered some facts about Malawi: First, it is called “the warm heart of Africa” because of its courteous and friendly people. Second, it is one of the poorest countries in the world. Malawi is the third country with the lowest average income earned per person (Malawi is ranked by the GNI (Gross National Income) per capita as the number 180 among 182 countries as stated by the World Bank Group, 2019) . Likewise, it remains in the group of countries with the lowest Human Development Index (Malawi is ranked by the HDI (Human Development Index) as the number 172 among 180 countries as stated by the United Nations, 2020). Third, Malawi relies heavily on external aid. In 2018, Malawi received 1,515.5 million dollars from Official Development Aid, which represented 20% of the country’s GDP (Gross Domestic Product), and an important portion of the government’s budget.

Those facts were proved by my first-month experience living in Malawi. The Malawian people have always a kind smile, and the m2m Malawi’s team created a second home for me in Lilongwe, Malawi’s capital city.

One week after my arriving I visited some healthcare facilities in the district of Zomba, where m2m’s programs operate. This field experience led me to understand what poverty rates mean. Although Lilongwe City experiences frequently electricity and water shortfalls, there is a huge gap between the urban and the rural Malawi, where 90% of the people lack electricity and use charcoal for cooking (USAID, 2019) and women spend one hour per day collecting water (UNICEF, 2006).

In rural Malawi, where 85% of the population live and the major part of m2m’s programs work, the people are poorer than in the urban areas and survive from subsistence agriculture. For instance, in the district of Zomba, while 15.8% of the people living in the city are poor, 55.9% of the population who lives in the rural areas is poor. m2m’s peer-mentors (mentor mothers and expert clients) do not escape from this reality. The majority of them come from a low-income context, they have not completed the high school and m2m offered them their first formal employment.

Nonetheless, the practice to engage HIV-positive people as volunteer peer-to-peer educators is extensively used by several HIV-programs, and some of m2m’s peer-mentors have worked for other organizations as HIV peer-counselors, m2m is one of the few organizations that formally trains, employees and pays people living with HIV for their counselor services, which dignifies the peer-mentor role and includes a stigmatized population in the country’s active labor force.

The second chance to explore my initial ideas about Malawi was attending community health technical working groups where I met representatives from the world’s biggest official cooperation agencies, multilateral organizations and NGOs. However, Malawi is overflowed of foreign aid organizations, you do not find the big international food chains in the country, due to the low-income Malawian market is not attractive for them, even when the country has a fast-growing population rate, which is reflected on the foreign direct investment rate, that represents less than the 7% of the official international aid inflows of the country (World Bank Group, 2019).

On the other hand, a lot of the basic products are offered by South African or Tanzanian companies, because the domestic industry representation is poor, which means less available income for the government in taxes. Similarly, the government has not important investments in the business sector or any additional revenue stream, which leads to the constant country’s fiscal deficit.

After six months of living in Malawi, my conclusion is that the country requires urgently private investment instead of pursuing a bigger budget from the international cooperation agencies. Although a lot of Malawians survive from the health, feeding and education services provided by international agencies or NGOs, a sustainable development approach for the country demands public and private investment addresses to mobilize the economy and generate formal employments,  increasing the income level of Malawi’s people.

From this perspective, m2m creates a relevant impact on Malawi, beyond its important contribution in decreasing the country´s mother-to-child-transmission of HIV and improving the HIV-positive clients retention on treatment, m2m economically empowers people living with HIV by providing them formal employment and salaries for 485 HIV-positive peer-mentors in a country where 70.3% of the population lives with less than 1.9 USD per day (World Bank Group, 2019).

For this reason, growing the m2m Malawi’s social impact is not restricted to increasing the number of HIV-positive clients reached by its programs; it means also improving the labor conditions and providing development opportunities for m2m’s peer-mentors, which is the purpose of my LGT Fellowship.

During the last months, besides supporting m2m Malawi’s strategic process, my fellowship has focused on designing a wellness and learning and development program for the m2m’s peer-mentors, which aims to empower them to build a most prosperous future for themselves and their families.

The program has two priories: First, upgrading the peer mentor’s education level by supporting them to complete the secondary school and develop vocational skills for starting up their businesses or continuing a professional path in the health sector. Second, assist them in the achievement of their health outcomes (treatment adherence and virus suppression) and engage them in healthier lifestyles that support their health conditions and enable them being role models in their communities.

From m2m’s perspective investing in its peer-mentors development will be translated firstly, in a better performance, increasing the programs’ outcomes and clients reached, as result of building capabilities and motivation in its staff, and secondly, providing tools for a stigmatized community to change their lives, even when m2m is unable to continue providing employment opportunities due to the close or change of their programs in specific regions.

My dream is that the seed that I am planting through the fellowship will germinate in a mentor mother who became a professional health worker, in an expert client that improved his/her health outcomes as result of the implementation of the employee wellness program, or in a mentor mother that started-up a business providing better income for her family.

Thanks to LGT and m2m to provide me an opportunity to connect my heart, my skills, and my spirit with tangible opportunities for unleashing a change in the world.

“To me, the poor are like Bonsai trees. When you plant the best seed of the tallest tree in a six-inch deep flower pot, you get a perfect replica of the tallest tree, but it is only inches tall. There is nothing wrong with the seed you planted; only the soil-base you provided was inadequate. Poor people are bonsai people. There is nothing wrong with their seeds. Only society never gave them a base to grow on.” – Muhammad Yunus