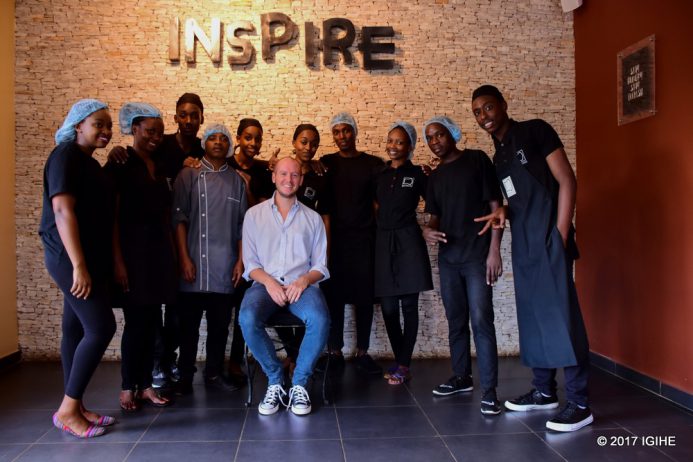 Myself (center) with a few staff. I was lucky to have worked with and to see their skill and career growth over 11 months.

Over the last 11 months, what’s been ingrained in my mind is that I’m constantly falling out of a plane and trying to put together a parachute that could (in theory) work. If you’ve ever jumped out of a plane, you have 60 seconds of free fall till you need to use a parachute. Plenty of time, right? That’s a good metaphor for the challenge I took on with the LGT Impact Fellowship. My name is Andrew Herweg and I was the marketing manager for Kigali, Rwanda based Brioche Ltd, a premium East African food & beverage company. Like jumping out of a plane, it’s exhilarating yet quite distressing and during these 60 seconds of free-fall of a fellowship, I’ve learned….

Patience:
Oh, and I needed a lot of it. I’ve been taught to expect the unexpected and that nothing will ever go according to plan. From waiting outside in the pouring rain for an hour and half after an event to be picked up to getting a phone call an hour after delivery is supposed to be made to re-confirm what I ordered, I’ve experienced a lot! But learned the more patience I have, leads to better team and personal performances and ultimately, less stress.

Look at yourself first:
New and unexpected challenges will always pop up (obvious, right?). This is what Jean-Philippe Kayobotsi, the CEO of Brioche Ltd. pointed out to me during a 1-on-1 in February and that challenges that do arise, could be more of my own personal un-doing, which in part was to an extent. My struggle in this case was realised when I was having difficulties productively working with a locally contracted marketing firm. After making personal and structural adjustments, my relationship improved with the firm. From this I realised, start by looking at myself rather than at others first when a problem arises.

Value of grassroots marketing:
It’s about going back to basics, handing out flyers, vouchers, getting face-to-face interactions with target customers is how Brioche is slowly finding marketing success. Before, landing in Kigali I was coming from a public relations and digital marketing world in London, New York City and Nairobi and it required a large shift in mind-set adapting tactics and strategies for Kigali. Whilst, ‘experts’ online and off-line are noting marketing needs to be digital, experiential first, don’t forget about traditional marketing techniques, they’ve been around for a long time and there’s a reason for that.

Business networking event in Nairobi, Kenya. Featured Head of IBM Eastern Africa with over 90 attendees. Strong attendance was due to
grass-roots promotion.

The first response I almost always heard from staff was Yes! However, Yes was merely an acknowledgement that I had said something. It didn’t mean whoever I was talking to actually understood anything of it. What I’ve learned is I needed to with whoever I was speaking to having him/her ‘certify’ the task I presented to ensure that he or she understood something, anything. I learned this when I told staff to hand out vouchers on a Monday, came back on Thursday and no vouchers were distributed because they were confused by my instructions.

Ask why, why, why

Always kept asking why till I got to the heart of the issue. The more I dug into an issue, the first response given to me was completely different from the last response. For example, I was trying to figure out why a certain product was having poor sales. I was told because customers weren’t coming, it was raining, delivery was late then found out the microwave wasn’t working properly.

Never sugar-coat anything! My marketing leadership has not led to a drastic increase in Brioche’s bottom line, new customer acquisition has fluctuated month to month and increased customer loyalty still remains to be seen. But yet, I’ve seen much improved performance by employees, secured media and blogger coverage of Brioche by a who’s who of East Africa, hosted full capacity events and in-grained Brioche ever-more into the Kigali and Nairobi communities. So what’s the verdict on my performance? It has been good enough to earn myself a contract extension with Brioche for another, wonderfully challenging year to ‘finish what I started.’
Those are my lessons learned and the wisdom I impart on you. Now, don’t mind me, I’m taking a month holiday off in preparation to once again ‘jump out of the plane’ in August.