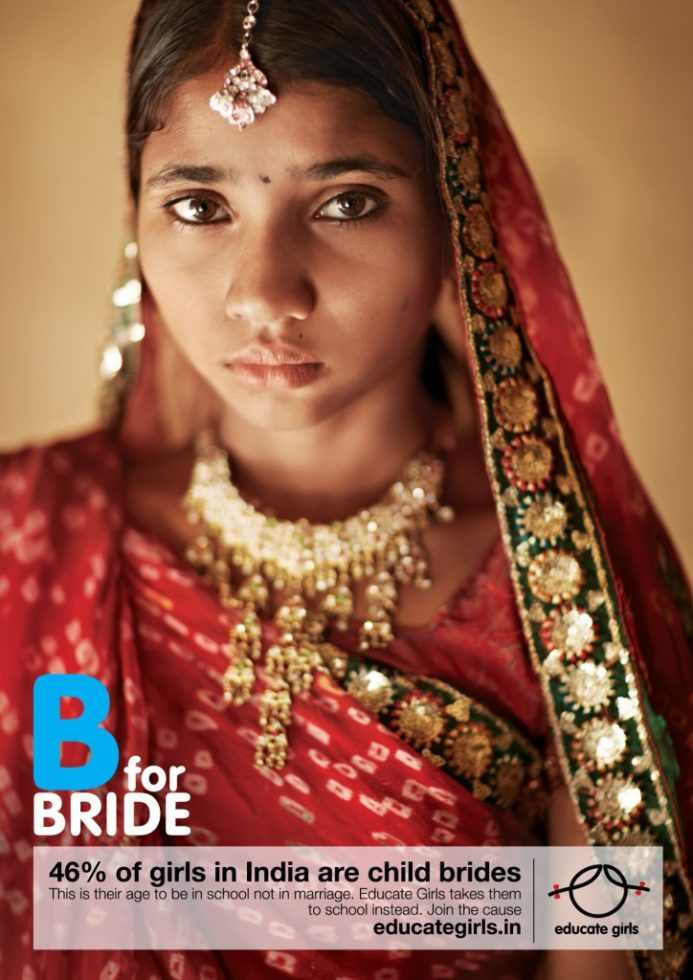 Last week, young Sita from Kinwarli, Rajasthan, got beat up and thrown out of her husband’s house after she went against his wishes and took her 10th grade exam. Since her in-laws wouldn’t allow her to study, this young girl went back to her parents’ and decided to take the exam anyway. Not only was she abused for it, but after she reported the incident to the local police, the whole community fined her 12 lakh rupees (1,200,000 INR = 17,000 €) for her insolence! 11 lakhs were required for her acting against her in-laws’ instructions and one lakh for actually giving the exam. Her own family is now ostracized from the rest of the village, since they will never be able to afford such a tremendous amount.

This story, which was released in the Dainak Bhaskar Newspaper last Saturday, is unfortunately one of the many that occur every day in Rajasthan. Girls as young as two are married off (68% of them are married before the age of 18) and many of them have to take care of household chores as well as look after their young siblings instead of receiving a proper education. Even for those who have the chance to go to school, they still have to deal with poor teaching. Curricula are not followed, material and books are missing, and infrastructure in general is inadequate. Most of the children eat on the floor in the school veranda, while drinking water and female bathrooms are not always available. It is also common for some classes to be held in the shade of a tree as space is lacking. The girls’ parents are often illiterate themselves and are thus unable to help them do homework. Adults are busy working and earning a living for their family – sometimes even the children have to work and get money back home – so schooling is hardly a priority. And yet, it is the one thing we need to insure if we want to break the vicious circle and improve the standard of living of Rajasthani communities.

Sita’s village belongs to Sirohi district, a “gender-gap” district – meaning that the number of boys educated in this area is at least 25% higher than the number of girls educated. The overall situation in Sirohi is particularly worrying: literacy rate for instance is alarmingly low, reaching a mere 56.02%. Educate Girls has decided to start working in the district this year, signing up a MoU with the State of Rajasthan in April. After operating in Pali and Jalore districts, we will now also supervise 542 villages in Sirohi where we will reach out to 200,000 children – 90,000 of which are girls.

To succeed we need to get the community together and help the villagers take ownership of their local school. Villagers start by forming school committees. They then rate their own school by filling out assessments made out of easily-understandable pictures that do not require reading ability. This way, they can clearly see where the issues are and what changes need to be implemented. The core idea is to offer tools for our beneficiaries to take action and become self-sufficient in the long term. Once the program is running smoothly, meaning that school results have increased significantly and girls are correctly taught and enrolled, our mission is accomplished. It will take time though before all Rajasthani girls stand in front of a book instead of a stove, cooking their husband’s meal, but it is a goal that can be achieved once their parents realize how much impact female education has on the overall community.

Let us hope that our efforts and the change of mentality will soon make Sita’s experience history!