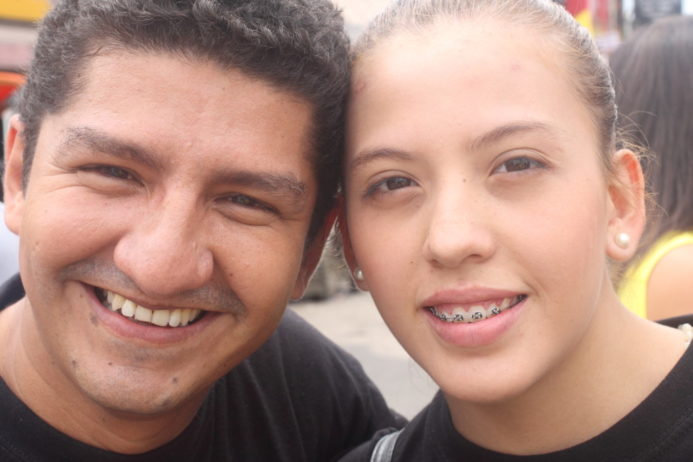 July in Florencia tastes like rain, it is the month in which it only takes two minutes for a light drizzle to become a storm. Once it starts you just don’t know when it´s going to stop.

For the florencianos it is the first July in which they have a nice place with air-conditioning to survive the weather of a humid rainforest, with a temperature that can go up to 40ºC. The city, with a population of 170,000 inhabitants, has a brand new mall that has become the meeting point for friends and families. It is also the place where the traditional brands such as the famous Colombian coffee shop, Juan Valdez are starting to launch.

For coffee lovers like Gamaliel, the CEO of Mukatri, a good cappuccino on a rainy afternoon after a day of work is the perfect excuse to spend a couple of hours away from the office to tell me his life story. I have to say that spending the afternoon at Juan Valdez listening to Gamaliel was one of the most special experiences in Florencia.

This time, as always, the place was crowded, but finally we found a place to sit down. Gamaliel doesn’t know how to start the conversation and bursts into an uncontrollable nervous laugh after I ask him if I can record him. After a deep breath, he gets comfortable in his chair and starts giving me the introduction he usually uses for the pitches with the impact investment funds.  “Gamaliel Álvarez, born in Florencia, Caquetá, a city in the south of Colombia, Business Administrator from the university of the amazon”. I stop recording and tell him the idea is to get deeper into his life so I can best share with others what his life is really about. Here is a short version.

Gamaliel (12 November 1976) or Gama, as his close friends call him, was born in a humble home in a traditional neighborhood in Florencia. His mother, Doña Helda, gave him a very strict education and instilled in him and his two brothers strong values, such as the importance of honest, legal work. Despite the region going through a cocaine boom and coca being part of the lifestyle of most caqueteños, (even used as money), Doña Helda raised her kids with the earnings of a small mom and pop shop that she still owns. Gamaliel remembers a simple and happy childhood jumping from the bridges to the rivers with his friends and playing football barefoot to save his shoes. He explains to me he only had one pair so he really had to take care of them.

Although his mother didn’t receive basic education, she always pushed Gamaliel, his brother Jacson and Bernarda, his little sister, to study so they could have a better future. However, when he grew up he also wanted to gain some money for his personal expenses, that´s why as a teenager he worked after school selling ice cream with his brother in the streets, and then he worked cleaning the tables of the butchers at the marketplace for 50 cents each, and also worked with one of the merchants moving boxes of fruit from one place to another, earning the minimum wage.

One day Gama decided to apply to a job as a cashier in one of the local banks. Even though no one believed he would make it, he excelled in the tests and interviews.  This opportunity changed his life; and one of those first changes was he got his first nice suit to go to work everyday. The bank also offered him a scholarship to study and he started with business administration in the University of the Amazon.

It was in that moment in which he met Gloria, his wife, best friend, coworker, cofounder of Mukatri, and most important of all, mother of Nelson (9 years), their child. They studied 5 years together, did their graduation thesis about Amazonian fruits and started a juice business in the center of the city that pushed Gama to quit his job at the bank. They were doing very well and even got contracts with the army that made the business very profitable. In order to grow the business they decided to accept another partner but they didn’t do so well choosing the person. A couple of months later, they were robbed and forced by one of the armed illegal groups to leave the business.

Gamaliel worked for a year as a full-time teacher of the Business Administration program and in 2005 they started Mukatri producing the arazá candies with their own hands and with no funds. They have been able to grow their business at an extraordinary rate (CAGR 2009 – 2012, 28%) and with great impact, thus they decided to start participating in several business plan competitions. In 2008 they were awarded the Destapa Futuro prize, organized by one of the top Colombian companies, Bavaria. Thanks to that prize they received a training program and funds for the company. In 2009 they received the award Idea tu Empresa organized by Technoserve and JP Morgan. In 2010 they applied to the New Ventures competition sponsored by the University of Los Andes in which they received a scholarship to study the acceleration of companies. This time they also received support to participate in funding rounds. In 2012 they received an excellence award from the Caja Social bank, and in 2013 they received the Green Companies award from Corpoamazonía.

Due to the idiosyncrasy of the region, they are also the perfect target for the drug traffic cartels for money laundering and they know that only by raising their hand they could receive in any second more than 500 K USD to invest in the company, but Gamaliel and Gloria never doubt to deny those kind of offers.

In 2011 they participated in the Latin American Impact Investment Forum in Merida, and in only 3,30” they pitched to several funds, including LGT VP, with which they have been negotiating since then. Gama feels that LGT VP is a great match, because he trusts it is a fund committed to their growth, and which will also pass on needed contacts and intellectual capital. They have found important value added through the iCats program since they have been preparing to receive their investment, and they feel they won’t be alone in facing this new stage of the company.

Although going through a due diligence process has not been easy for them, and they have been in negotiations for more than 2 years, it is the legal way in which they are used to work.

It is through those values that they have become a living example of legal work in the south of Colombia, a success story that Gama’s students admire. For my experience in Florencia I would say the transmission of values might be the most important impact of the company; more than the environmental benefits of protecting the amazon and supporting the farmers, they are addressing a problem of values in the region. They are part of a new generation of leaders that is starting to rise.

Gamaliel feels blessed for having those great opportunities, he never thought that someone from the south of Colombia and with low levels of income could be in a crowded auditorium in Mexico to tell the people about a dream called Mukatri.  He remembers Colombians at the forum crying, telling him how proud they were.

Gamaliel and Gloria know they still have things to improve regarding their processes, informality, organization and governance, but they are always willing to learn. The match between LGT VP and Mukatri is not just another chapter of the life of an entrepreneur, it is an important part of the Colombian history because of the intangible meaning it has.

Looking again into his eyes that are filled with emotions, I ask Gamaliel to tell me more about how he feels regarding the process with LGT VP. He tells me: – “well, you know it has been a long process, but we have also taken advantage of this time to prepare. We know it is a different way to work, another rhythm and business culture. Sometimes you even feel you want to go to the psychologist. After some time you get to discover the people that are behind the face of a serious investor and that makes the process easier. After the awards we had in previous years thought we were ready, but after we received our iCat we realized we still need order in our finances and more processes to gather the information needed to make better decisions. Today some of those things are already a habit”.

It is a quarter to 10:00 p.m and Gloria comes back after doing some grocery shopping to remind us the mall is almost going to close and we need to pick up Nelson at the shop of Doña Helda. After a 3 min drive Gamaliel jumps out of the car and Nelson runs to the arms of his dad. After 5 months working with Gamaliel I know nothing else matters in that moment for Mukatri’s CEO. The hugs of his family are the only energizer he needs to start another working day.