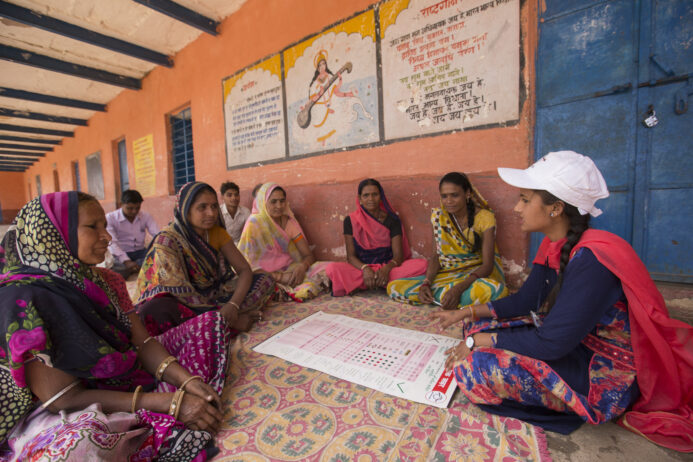 When I applied for the LGT Impact Fellowship in mid-March of last year, it was a different world altogether. There were only 162 confirmed COVID-19 cases in India. Public places and public transportation systems remained open. Nobody had the slightest idea that in less than two week’s time a country-wide lockdown would be declared and working from home would become the new normal for a huge part of the population.

I interviewed for and joined the portfolio organisation Educate Girls during the lockdown and have been working from home ever since. During the six months working as a Data Science Engineer for Educate Girls, I have experienced first hand the importance of data in a post-COVID world and have realized how data scientists can play a major role in venture philanthropy to maximise impact. At the same time, I have experienced the difficulties of working from a remote location and have come to appreciate the importance of face-to-face human interaction, which I took for granted in the pre-COVID world.

Educate Girls works to spread awareness on the importance of female literacy and helps out of school children (especially girls) to enroll in schools and continue their education. The various field operations conducted by Educate Girls generate a lot of data which is a gold mine of information, if one knows the right way to analyse the raw data. My areas of work are to build pipelines that consolidate and organize data from multiple sources, create dashboards to help visualize the data, analyse the data to discover useful underlying information and insights, and build models to predict geographical areas with high numbers of out of school girls for future expansion of the Educate Girls operations.

Examples of Field Operations and Analysis of Data Collected from Those

Since the end of March 2020, the schools have remained closed all over India. Education of children in rural areas suffered a setback because of this. Many children become vulnerable to dropping out of school during this period. In order to mitigate these negative effects of schools remaining closed for an extended period, Educate Girls conducted learning camps in selected villages so that children could engage with learning outside schools. A primary-school-level Hindi and Math curriculum was taught by Field Coordinators from Educate Girls to children in camps complying to COVID 19 safety standards. Assessments were conducted in the beginning and end of camps to monitor the improvement in learning of children. Analysing the data collected from the camps helped the organisation to identify problems and course-correct, as well as identify best practices and replicate those in other camps. The data also answered interesting questions such as the effect of age group and peer influence on the learning gains of children. The learning camps are still going on in many villages, and we are still in the process of collecting and analysing data from those. We are hopeful to get a clear picture on the effect of these camps on learning gains of children and subsequent enrollment of out-of-school children who attended these camps.

Educate Girls starts each Program Year (coinciding with the Financial Year) with a target number of out of school girls to be enrolled that year. Each entry is monitored and followed up at various stages of enrolment. This year, we defined a model to predict the number of total enrolments based on the enrolment numbers till date of the current Program Years as well as historical data. This model helps identify the geographical regions lagging behind and also highlights the areas in which an underperforming region is lagging behind neighbouring regions, Thus the model is helping the organisation to course correct, and thereby aiding it to achieve the annual enrolment target.

Putting a Face to the Numbers

A massive downside of working from home is not being able to go on the field and interact with the children who I am actually working for. However, I was not properly aware of what I was missing until I attended the Foundation Day celebration of Educate Girls, held online on the 4th of December 2020. The two-hour long event contained pre-recorded as well as live testimonials from Field Coordinators and volunteers known as Team Balikas who talked about their experiences on the field during this very tough year. Their words brimming with motivation, passion and conviction and their joyful,  smiling faces had almost a magical effect on me. When they talked about the children who were eager to go to school and learn despite all hardships, I could finally see the individuals behind the numbers. I have yet to go on a field visit; hopefully I will be able to go on one very soon!

Working with Educate Girls as an LGT Fellow during the COVID 19 situation has been an invaluable learning experience so far. I have observed how harnessing the power of data can help organisational decision making and maximising impact. At the same time I have learnt to appreciate the importance of the human connection behind the sheer volume of data. I look forward to utilising my technical knowledge and experience to the maximum extent possible in order to help children go to school.